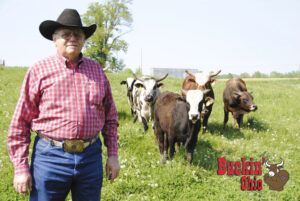 As a young man, Denny Thorsell never thought he would be able to live his dream of being a cowboy.  After going to work on a ranch in Texas at age 15 and then becoming a horse trainer, that dream became reality.

It was only later when his son, Shawn, started riding bulls in high school that Denny discovered his love and appreciation for these amazing animals. The result was the creation of Buckin’ Ohio, an event series that featured some of the very animals raised here at the ranch.

Sadly in 2018, Denny was called home and his presence at the ranch has been sorely missed. His legacy, however, still remains. Much of what has become Buckin’ Ohio is due to his hard work, vision, and the belief that, in the heart of Ohio, the wildness of the west can prevail.

"Trust in the Lord with all your heart; and lean not into your own understanding. In all ways, acknowledge Him and He will direct your path."