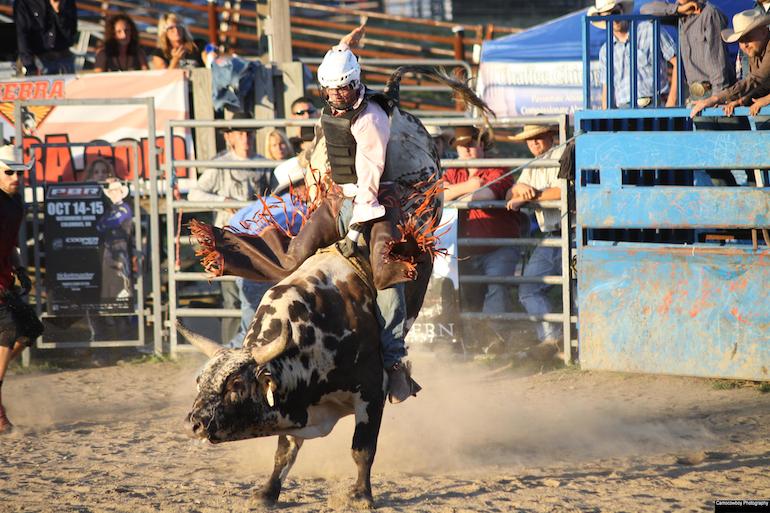 Where the Spirit of the West come to life.

Wild, tough, rich with excitement, for the cowboy and the spectator.  Bull riding has become one of the fastest growing sports in the nation, where the cowboys, as well as the bulls demonstrate their tremendous athletic abilities.  Because of the growing popularity of the sport, both the cowboys and the bulls are becoming nationally known stars.  The Buckin’ Ohio competition is packed full of adrenaline-rushing action and edge-of-the-seat excitement.

Rules of the Sport

The bull rider and the bull are each awarded points.  Many experienced professionals are able to gain scores of 75 or more.  A score above 80 is considered excellent, and a score in the 90s is exceptional.

Two judges, or, sometimes more, are in charge of the scoring.

The ride is scored from 0-100 points. Each judge scores the bull from 0-50 points and the rider from 0-50 points. The combined point totals from both judges make up the final score for the ride.

1). The bull rider must ride for 8 seconds

3). Points are awarded on several key aspects of the bull rider’s performance.

4).  Points are awarded on several key aspects of the bull’s performance.

Buckin’ Ohio provides a family-friendly environment to enjoy our professional bull riding competition. We ask everyone to support a safe environment and reserve to the right to remove anyone who does not.

Additionally, we ask that guests:

1). Do not bring anything larger than a small cooler.

2). Do not bring pets… only registered service animals will be admitted,

"Trust in the Lord with all your heart; and lean not into your own understanding. In all ways, acknowledge Him and He will direct your path."